Each jet ski holds 2 passengers as you blast up to Stradbroke Island with guides who are familiar with the area; no experience necessary

4.914 Ratings
4.9
Average of 14 ratings
86%
14%
100% Verified Reviews
All reviews are from people who have redeemed deals with this merchant.
U
Usman
1 ratings1 reviews
The bestest. Great experience with great friendly staff. Would love to go again.
Helpful
J
Jane
2 ratings1 reviews
This was so super fun - I can't wait to do it again! The staff were so friendly and super helpful - I will definitely be back!
Helpful
M
Martin
2 ratings1 reviews
Booked the hour safari, had a great time. Was a little windy so the water wasn’t calm but that made it better. Would go again
Helpful
G
Guest
1 ratings1 reviews
Great service, great value and the staff were excellent! Highly recommend, such a fun time!
Helpful
R
Rose
4 ratings2 reviews
Awesome day! Definitely going back!
Helpful
Earned when a user has written 5 or more reviews
Want to earn this badge? Share 3 or more photos
Earned when a user has gotten 2 or more helpful votes

One of the biggest mysteries in life is why they named them jet skis instead of boatercycles. Jump on with today’s Groupon for Jet Ski Safaris, Main Beach:

Those taking part in a 55-minute tour explore the pristine waterways of the Gold Coast and blast their way up to South Stradbroke Island and back. Those with a little more time spend 90-minutes cruising along the sub-tropical shores of South Stradbroke Island and head north for 20km, weaving around the island before making their way back. It time allows, Groupies may be able to stop off for a little snorkelling trip along the way.

Groupies who choose the two-and-a-half hour tour follow instructors through high tide passages that whip and snake their way through miles of untamed mangroves and flood planes to North Stradbroke Island. On the way back, Groupies pull into an island pub for a break and a splash in the water. This tour is an 80km round trip with hairpin bends and Australian flora and fauna at ever turn. 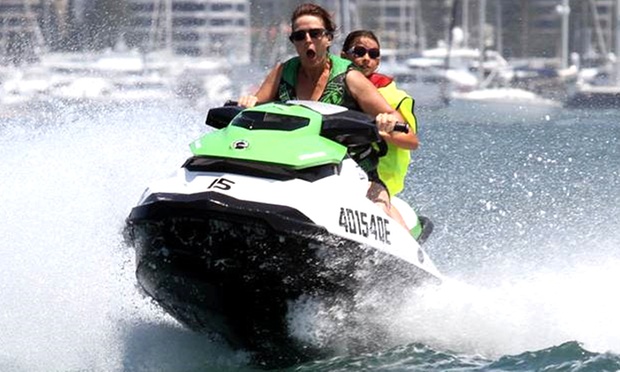 The team at Jet Ski Safaris take travellers and locals alike on a journey through narrow tidal passages and along pristine sandy beaches of Stradbroke Island. The staff have over 11 years’ of operating experience and are able to accompany passengers of all skill levels, including children and people who have never ridden a jet ski before. The tour guides are known to throw in little surprises on each tour, so no two are the same. 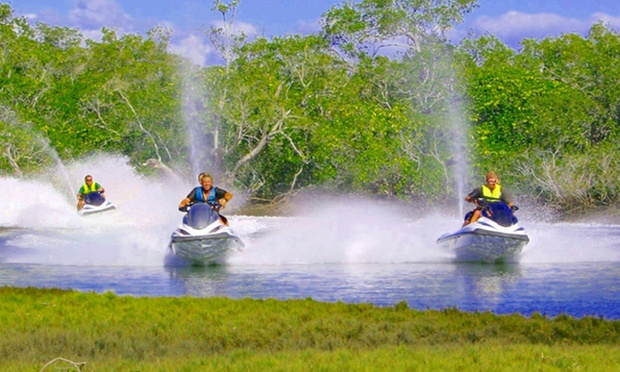 Jase and mathew took us on the 2.5hour safari and they were fantastic guides and so patient and good with me as a beginner... I absolutely had the the best time ever! Cant recommend them highly enough
Claira C, TripAdvisor, Sept 2014

Myself and a mate went an hour and a half jetski safari today and loved it. The tour guide Jason was fantastic!highly recommend this to anyone that is ready to have some fun out on the water.
james13298, TripAdvisor, Aug 2014

• Purchase multiple vouchers
• Please arrive 10 mins prior to booking time for safety regulations
• Blackout dates: 1 Dec 14-31 Jan 2015
• Drivers must be 16 years or over
• Passengers must be 8 years or over
• For twin share: combined body weight must be under 200kilos
• Must be able to understand and write fluent English to understand and pass safety regulations
• Original value verified on: 18 Sep 2014
• Standard fine print for all deals

• Expiry: 90 days from purchase
• Bookings must be made at least 24 hours in advance
• Phone to book: 0409 754 538
• State Voucher and Security Code at time of booking
• Present printed or smartphone voucher on arrival
• Download free Groupon app for Android and iOS