3.528 ratings
3.5
Average of 28 ratings
39%
21%
7%
11%
21%
100% Verified Reviews
All reviews are from people who have redeemed deals with this merchant.
V
Vincent
2 ratings2 reviews
Great rooms! Great selection of tracks available! One of the original karaoke joints in the city over 15 years ago and still going strong!
Helpful
N
nicole19TOP REVIEWER
5 ratings5 reviews
The song options are quite limited, but the room was good and the free drinks were nice. I'd recommend this place for a good time.
Helpful
L
Luke
1 ratings1 reviews
Great price, very complicated music system, didn't have some songs
Helpful
T
Tra
4 ratings2 reviews
We had good time there :) thanks
Helpful
S
Serey
1 ratings1 reviews
Booked a karaoke room for a hens party and we had a blast of a night. There were no problems using groupon. Great for when you want to have fun and sing your heart out but don’t want to embarrass yourself outside of your group.
Helpful
D
Daisy
1 ratings1 reviews
Garry easy to use karaoke system! Good song selections! Cool light up table and chair inside personal booth. Clean bathrooms and nice roomy reception in a cool location! Thanks for the great night out!
Helpful
replied
View Comment +
L
Li
3 ratings2 reviews
Friendly staff, the Chinese song list is a bit old.
Helpful
K
Kojimoto
3 ratings2 reviews
You can bring some food and drink but still so cheap!! And the karaoke room is huge and beautiful. The stuff was kindnesses.
Helpful
replied
View Comment +
Earned when a user has written 5 or more reviews
Want to earn this badge? Share 3 or more photos
Earned when a user has gotten 2 or more helpful votes

How to Redeem
• Expiry: 90 days from purchase
• Email to book: karaokeworldsydney@gmail.com
• Phone to book: (02) 9283 8283
• State Voucher and Security Code at time of booking
• Present printed or smartphone voucher on arrival
• Download free Groupon app for Android and iOS

Operating since 1994, Karaoke World is one of Sydney's first and longest established karaoke room venues. After a thorough renovation, the establishment offers over 15 fully air-conditioned private rooms equipped with a new surround system. The music database boasts over 120,000 songs in a variety of languages including English, Chinese, Japanese, Thai, Indonesian, and Korean, and genres like pop, rock, and R'n'B, as well as disco, old classics, and children's songs. In addition, the venue serves up a variety of refreshments and takes pride in being frequently chosen for film and video clip shootings. 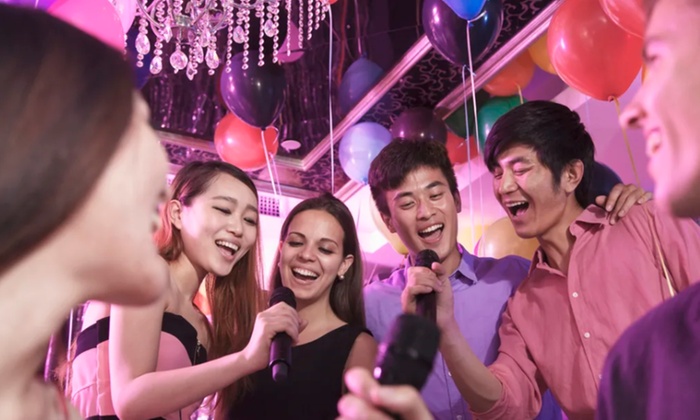