Up to six aficionados of Japanese cuisine can enjoy dishes like oysters, scallops or kingfish, sided with a glass or a bottle of wine

3.9136 ratings
3.9
Average of 136 ratings
47%
26%
10%
7%
10%
100% Verified Reviews
All reviews are from people who have redeemed deals with this merchant.
M
MaureenTOP REVIEWER
39 ratings13 reviews
Great food & wine
Helpful
D
dianagordon
3 ratings3 reviews
Sushimi, New York cut steak & Pork Cutlet were delicious. Lovely evening. Thanks also to the waitress who was very friendly and he
Helpful
M
MariaTOP REVIEWERHELPFUL REVIEWER
6 ratings6 reviews
We have dined here a few times and the food is usually sensational. It all was except one dessert where the panna cotta was so solid it was inedible and was more like a rubber door stop. The waitress had no idea panna cotta was not meant to be like that - and did not offer a replacement. We did the Groupon Deal which stated entrée, main and dessert for two from the set menu. This is where the trouble started. The waitress insisted they had been advised that the deal was an "entree to share" then a main and dessert each. How can two people share 3 scallops? Anyhow we ordered two entrees anyway and I think because of the uneaten dessert they didn't charge us for the extra entrée. It did spoil what should have been a beautiful night though. We were not alone as there were other misled Groupon diners who challenged the waitstaff to no avail.
Helpful
F
FionaHELPFUL REVIEWER
3 ratings3 reviews
Sadly last year was much better There was a heated discussion between patrons and the waitress about the misleading advertising that stated 3 course meal each but it was actually a shared entree. My husband had the steak and it was not cooked how he asked and was thin and chewy,We had the cheese platter afterwards and it was served with no crackers just chunks of bread that was half toasted. Sadly I would think twice about recommending or going back when last year we could not stop telling people how wonderful it was
Helpful
K
KerryTOP REVIEWER
6 ratings5 reviews
Wonderful meal
Helpful
Earned when a user has written 5 or more reviews
Want to earn this badge? Share 3 or more photos
Earned when a user has gotten 2 or more helpful votes

• Limit of 1 voucher per option
• Purchase up to 1 additional as a gift
• Not valid on public holidays
• Not valid from 14 Dec 2019 to 07 Feb 2020
• Valid for eat-in only
• Menu is subject to seasonality/availability
• Valid for set menu only
• The deal is for a starter to share, two mains each and a dessert each
• Booking via Groupon Booking Tool only; no walk-ins accepted
• Check availability before purchase
• Standard fine print for all deals

• Valid to: 31 Mar 2020
• Purchase voucher and book online via https://www.groupon.com.au/reservations/
• If you received your voucher as a gift, sign in or register for a Groupon account then click on the 'Received a gift? Book Now' link in the top right
• Select date of booking and enter details
• You'll receive an email to confirm reservation details
• Present printed or smartphone voucher on arrival
• Download free Groupon app for Android and iOS

About The Bower Restaurant

Located on Marine Parade and boasting views of Shelley Head and the ocean, The Bower Restaurant is a family-run eatery offering outdoor seating and a menu aimed to reflect seasonal changes. Customers can take in the views and enjoy creative dishes such as a Chicken Ramen or the Pork Tonmkatsu or the daily changing fresh fish specials. The meal can be complemented with an extensive selection of wine, gin and cocktails. Check out The Bower on Facebook and Instagram.

In and Around Manly 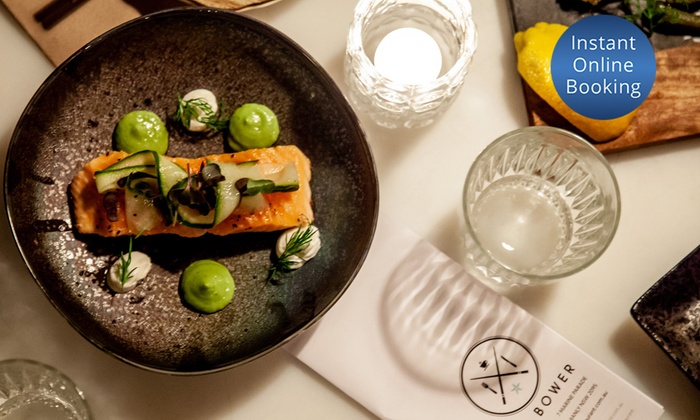