Sydney: Up to Three-Night Stay for Two People with Early Check-In and Late Check-Out at MetroResidences Darling Harbour

Sydney: Up to 3-Night City Break with Late Check-Out

Add-ons (payable directly to the hotel):

Place breakfast orders 1 day in advance and items will be ready at 9am.

When not out and about, Groupies can settle into their sleek Queen Rooms, choosing between the cosier Petite type or the Standard option with some extra space. With early check-in and late check-out, guests get some extra time to ease into the holiday mode and back to reality.

Famous for its glittering beaches, iconic harbour and glamorous shopping and dining precincts, Sydney is a cosmopolitan mix of attractions that has been delighting visitors for decades. The most populous city in Australia, Sydney is known for being cutting edge, down-to-earth and a mecca of diversity where natural and man-made sites abound. Home to the Harbour Bridge, Opera House and golden Bondi Beach, the city buzzes with an infectious energy that enchants travellers both from neighbouring states and further around the globe.

Embark on a self-guided tour of the city, weaving up to Circular Quay to see the iconic Sydney Harbour Bridge and the Opera House. Then stroll over to The Rocks to learn about the city’s history, where cobbled streets, Aussie pubs and weekend markets present a cultural experience. Back at the Quay hop on a ferry bound for Manly, Taronga Zoo, Balmain or Mosman. Along the way, appreciate the water views and snap photos of waterside properties and the CBD skyline.

Hit up suburbs like Paddington and Surry Hills for trendy boutiques, hip bars and creative restaurants. In the city, spread time between museums, galleries and waterside locations like Darling Harbour and Circular Quay. Wrap up the day with high tea in a swish hotel or authentic meal in Chinatown.

• A surcharge of $20 applies for Saturday night stays

• Campaign is valid for 2 guests

• Bookings are subject to availability

• Valid credit card & photo ID are required at check in

• No cancellations and/or amendments once a booking is made

• Purchase your voucher and book online via https://www.groupon.com.au/reservations

• If you received your voucher as a gift, sign in or register for a Groupon account then click on the 'Received a gift? Book Now' link in the top right

• Full name details are required (i.e. first name & surname), as well as your email address and contact information (the hotel will not accept bookings that are not complete)


---
Booking your next holiday? Need insurance? Save 20% on your next travel insurance policy with InsureandGo - Groupon customers enter the code 'group20' on application. Click here to redeem.

4.02 ratings
4.0
Average of 2 ratings
100%
100% Verified Reviews
All reviews are from people who have redeemed deals with this merchant.
R
Rachelle
6 ratings2 reviews
that it's in a good location, most of the staff are friendly, the room are nice and comfortable, the only thing was my air con gage was a bit ify. I would recommend staying here and I would stay again.
Helpful
G
Guest
1 ratings1 reviews
Location
Helpful
Earned when a user has written 5 or more reviews
Want to earn this badge? Share 3 or more photos
Earned when a user has gotten 2 or more helpful votes
Close
Choose Your Deal Option: 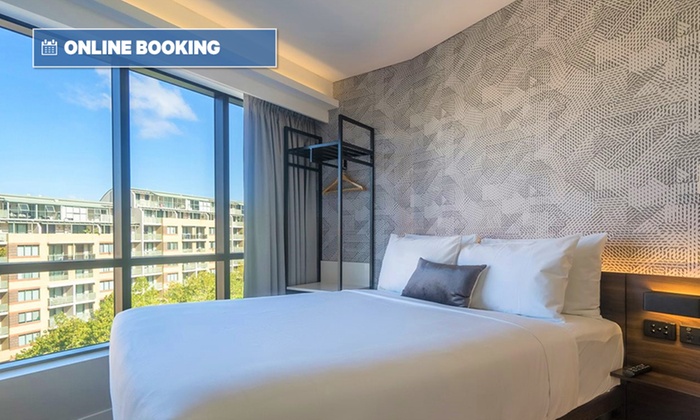 Sydney: Up to Three-Night Stay for Two People with Early Check-In and Late Check-Out at MetroResidences Darling Harbour